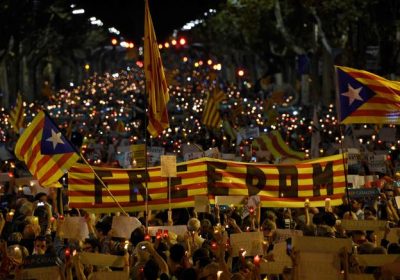 In response to the Catalan Parliament´s declaration of independence, the Spanish Senate decided to apply the antidemocratic article 155 of the Francoist constitution in all its strength, allowing Rajoy´s Council of Ministers to take over the regional government of Catalonia. The Council, which had already taken over Catalonia´s finances, deposed its president, Carles Puigdemont, and his ministers, dissolved its parliament, with the excuse of calling antidemocratic regional elections on 21 December, and took over the Catalan police force, the Mossos D´ Esquadra, among other institutions.

Rajoy and King Felipe VI, with the enthusiastic support of Ciudadanos, and the shameful support of the PSOE, have the clear determination of uprooting the will of a people who have decided to self-determinate as an independent republic and was initiating a constituent process.

To achieve this, they threaten to use the Spanish armed forces if the thousands of civil guards and national police that they have deployed as an occupation army on Catalan territory result insufficient. Faced with the difficuly of replacing the complex regional state apparatus, they attempt to intimidate public workers who may be insubordinate with disciplinary sanctions, ranging from withholding pay to sacking and prison.

In its repressive charge, the Spanish regime has begun to imprison the leaders of the independence cause. On Thursday 2 October, the National Court judge, Carmen Lamela, ordered the jailing without bail of Catalan vice president Oriel Junqueras, and seven other ministers of the Catalan government, Jordi Turull, Raul Romeva, Josep Rull, Dolors Bassa, Meritxell Borras, Joaquim Forn and Carles Mundo. They stand accused of rebellion, sedition and misuse of public funds, crimes with sentences of 30 years of prison. Another minister, Santi Vila, was also indicted and released on probation after paying a 50,000 Euro bail.

The arrests of Junqueras and the ministers, together with the previous detentions of the leaders of the Asamblea Nacional Catalana and Omnium, Jordi Sanchez and Jordi Cuixart, sum up ten Catalans who are imprisoned for the “crime” of defending their peoples´ right to decide and abiding by the mandate of the urns, in which the Catalans sovereignly decided on 1 October.

To these detentions, we must also add judge Lamelas extradition request to Belgian and EU authorities, that weighs over Catalan president Puigdemont and the ministers that are exiled in Brussels, and ther persecution of Carme Forcadell and the Board of the Parliament.

These arrests reveal Rajoy´s lies about the “measure” with which the Spanish regime is supposedly approaching the Catalan crisis, and the “democratic process” leading to the 21D elections. They reveal the authentic coup d´etat that Madrid has carried out by deposing the authorities legitimately elected by the Catalan people, with the objective of impeding their right to become independent from the Spanish state.

So much brutality can only by explained by the deep crisis of legitimacy that the bonapartist regime of Spain is in after the popular resistance the Indignados opposed to the austerity measures it implemented to try to reestablish Iberian capitalists´ profits after the global crisis of 2008.

It is a bonapartist regime born out of the antidemocratic constitution of 1978, thanks to the complicity of the Spanish peoples´ leaders of the PSOE, the Communist Party and the opportunist “nationalisms” of then, who allowed the heirs of Francoism to continue in power, supporting the monarchy and betraying all who gave their life fighting for a democratic republic against fascism.

The Catalan population has responded immediately to these attacks. Thousands took to the streets in Barcelona the day of the arrests. On Friday 3 November a massive “cacerolazo”, a rally in Barcelona and marches in the towns and cities of Catalonia, have called for a general strike on 8 November, and a great mobilization on 12 November, to demand the liberty of the political prisoners and the lifting of article 155.

In Spain and around the world, a great number of organizations and renowned persons have spoken out against this new assault of the Spanish regime. Although Rajoy´s PP is now trying to avoid responsibility for judge Lamela´s decisions, with false arguments of the courts´ “independence”, everyone can see that they are a direct consequence of the application of article 155 and the decision to ignore the peoples´ elemental right to self-determination.

What is at stake in Spain and Catalonia affects all workers and peoples of the world who fight against repression and the denial of democratic rights by dictatorial regimes, or by others who, wearing a democratic disguise, don´t hesitate to trample the most elemental liberties when the interests of the capitalist multinationals that they represent are endangered. This is the case of the Spanish governmnet, regime and monarchical state.

This is why we, the signatories, of this statement add our voice to those of others who condemn these detentions and persecutions worldwide. We call, in the broadest and most unitarian manner, on all organizations and persons who defend democratic liberties, to carry out a strong campaign demanding the immediate release of the Catalan prisoners, the end of persecutions of independentist officials, the lifting of article 155, and the recognition of the right to self-determination of the Catalan people, their inalienable right to decide and to consitute an independent republic, as they have expressed by majority in the 1 October plebiscite.